Atomistic modeling applied to design of materials for the future 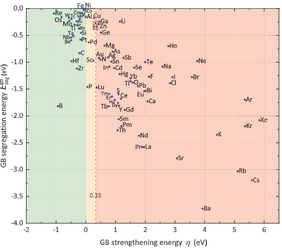 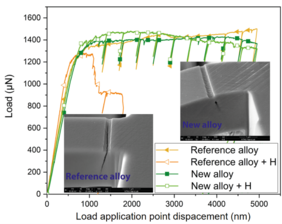 Hydrogen is one of the most important energy carriers of the future, as it can be produced and converted without CO2 emissions.

Unfortunately, many high-strength materials being considered for fabrication of efficient hydrogen transport and storage infrastructure are susceptible to hydrogen embrittlement (HE). This also applies to nickel-based superalloys, which are typically used for extremely stressed components such as fittings. Under hydrogen exposure some grades tend to exhibit grain boundary embrittlement.

Grain boundaries (GB) are specific microstructural entities of materials where the local chemical composition can be very different compared to the averaged chemical composition. This is due the tendency of some elements to segregate in this atomistic less densely packed area forming the interface between grains of different crystallographic orientation, also known as GB. Some of the segregating elements, such as hydrogen, lower the cohesion between the grains while others improve the cohesion and thus the overall mechanical properties.

Hydrogen embrittlement has been held responsible for a number of catastrophic failures in various industries, including construction and petroleum, and has attracted much attention in more than 100 years of research. However, direct quantitative studies of this phenomenon have only recently become possible following the development of modern experimental and computational techniques that allow material description at the atomic scale, the scale of a hydrogen atom. Atomistic modelling using density functional theory (DFT) calculations provides a unique way to determine the intensity of segregation and the resulting binding strength of GB. Fig. 1 shows the results of a DFT high-throughput study for all technically relevant chemical elements (84!) in Ni.

Based on these results, alloying elements can be classified according to their effect on the cohesive strength of a material, i.e. whether they reduce hydrogen embrittlement (green area), increase it (redarea) or whether they are neutral (yellow area).

Implementation of these data in the thermodynamic modeling software SEGROcalc developed by the Materials Center Leoben (MCL) enables the design of suitable microalloying concepts including optimized heat treatment. Validation of the models and compu­ta­­tional tools was performed using test alloys. The predicted segregation was validated by means of atom probe investigations and the increase in grain boundary strength was demonstrated in micro­cantilever tests (see Fig. 2).

To verify the design concept, a computationally designed nickel-based superalloy was fabricated on a larger scale and tested under hydrogen exposure. In tensile tests, an improvement of the elongation to fracture by a factor of 5 was achieved.

In summary, the computational alloy development approach has accelerated the material design process by a factor of 2 and has led to radically new solutions for the design and development of new alloys.