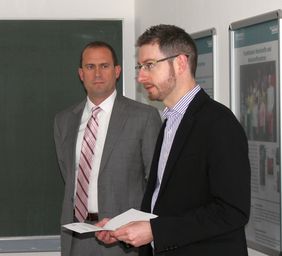 Abstract: In 2011, HfO2-based thin film capacitors were reported to exhibit ferroelectric behavior. This initial report generated both skepticism and excitement in the ferroelectrics community because it was unexpected and had gone undiscovered for decades. Since that time, new applications have been developed and proposed including 10 nm-scale non-volatile memory elements, ferroelectric field-effect transistors, neuromorphic computing elements, and infrared detector arrays (from the associated pyroelectric effect). Though still controversial, even negative capacitance has been claimed in HfO2-based capacitors
A non-centrosymmetric and polar space group (Pca21) is now generally accepted as the crystallographic structure underpinning the ferroelectric behavior. However, the driving forces enabling the manifestation of this phase are still debated or unknown. The ferroelectric behavior is only observed when the materials are processed in specific conditions (e.g., unique stress states induced by special annealing procedures), doped with certain substituents (e.g., Si, Y, La, and Zr), and in ultra-thin films (e.g., 10-20 nm).
In this work, we synthesized doped HfO2 and (Hf,Zr)O2 ceramics and thin films and monitor their structural evolution during processing and thermal equilibration in order to understand the kinetics and thermodynamics underpinning phase evolution and stabilization of the various polymorphic phases. In situ X-ray diffraction (XRD) is performed during heating of ceramics and thin films and XRD patterns are analyzed both qualitatively and quantitatively to determine phase transition temperatures and refine the crystallographic structures (e.g., the Rietveld method). Our results demonstrate that dopants (e.g., Si, Y, and Zr) substitute for Hf and, in some cases, can create non-equilibrium structures. We also report the results from a collaborative project between groups at NC State University, the University of Connecticut, and NaMLab gGmbH, in which we exhaustingly studied dopants and processing conditions for maximal performance and new applications. The work demonstrates that the best dopants for stabilizing ferroelectricity are those with large ionic radius and large electropositivity, which explains the robustness of ferroelectricity in La-doped HfO2 films.

This work was supported by the Army Research Office through contract number W911NF-15-1-0593.

Brief biosketch: Jacob Jones is a Professor of Materials Science and Engineering, Director and Principal Investigator of the Research Triangle Nanotechnology Network (RTNN), Director of the Analytical Instrumentation Facility (AIF), and a University Faculty Scholar at North Carolina State University. Jones’ research interests involve developing structure-property-processing relationships in emerging functional materials, primarily through the use of advanced X-ray and neutron scattering tools. Jones has published over 200 papers and delivered over 100 invited lectures on these topics. Jones is a Fellow of the American Ceramic Society and Vice President for Ferroelectrics in the IEEE Ultrasonics, Ferroelectrics, and Frequency Control (UFFC) Society. He has received numerous awards for his research and education activities, including an NSF CAREER award, a Presidential Early Career Award for Scientists and Engineers (PECASE), the IEEE UFFC Ferroelectrics Young Investigator Award, the NC State College of Engineering George H. Blessis Outstanding Undergraduate Advisor Award, the 2019 Alumni Association Outstanding Research Award at NC State, and two Edward C. Henry “Best Paper” awards from the Electronics Division of the American Ceramic Society.