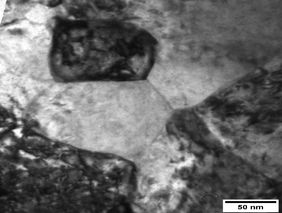 From steel used in civil engineering to silicon in semiconducting industry, the majority of materials nowadays used for structural and functional purposes are crystalline in nature. Depending on the processing and desired application, these materials are occasionally single crystalline, but in the majority an assembly of differently oriented grains of varying size and shape separated by grain boundaries. These grain boundaries are responsible for many mechanical, electrical, thermal, and magnetic characteristics in such materials. Thus, changing their internal structure can lead to a variety of tuneable properties, which is nowadays known as “grain boundary engineering”.

One could think of such grain boundaries as a nanoscale design space between two grains where atoms are arranged in a manner such that they “accommodate best“ to both grains. Thus, changing that atomistic structure through varying chemistry or deformation can lead to local spots of a “bad fit”, resulting in more or less densely packed grain boundary regions, which are the origin for the desired (or undesired) change in material properties.

Unfortunately, due to the atomistic nature resolving such grain boundary regions is rarely possible, which renders grain boundary engineering a rather laborious task.

However, considering that these more and less densely packed spots have different response to dynamic vibrations, one can indirectly measure the change in local structure from that damping response. However, to resolve such small changes in the dynamic behaviour, it is necessary to measure very small forces and displacements as well as take into account the fact that any air damping would dominate over the change in grain boundary structure. Based on our yearlong experience with micromechanical measurement techniques in vacuum, we were able to resolve this challenge and measure grain boundary modifications in nanocrystalline Tantalum (Ta), a material highly relevant in electronics, by developing a novel technique based on mechanical spectroscopy on microscopic specimens.

This novel method acts as a basis for further investigations on various structural and functional materials that might be advanced by grain boundary-engineering. Specifically, the possibility to quantify changes in the grain boundary structure in an efficient way paves an information driven approach to processing optimization to reduce the amount of “trial and error” that is currently necessary.

This work has been accepted for publication in the renowned international scientific journal Acta Materialia, Elsevier.