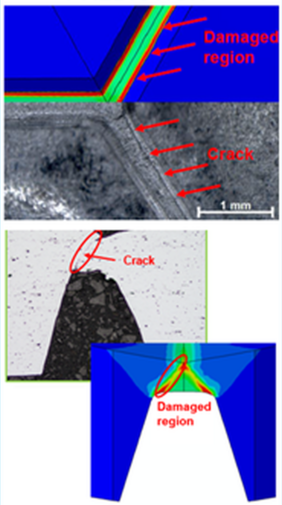 Overlay of experimental characterization (grey images) and numerical prediction (colored images) of a crack evolving at the desired failure region in an electronic capacitor; images: MCL

Ultralight capacitors are widely used in the automotive industry and with the emerging electro mobility they become more and more important.

The major cause of failure of these devices is the increase of the local temperature during service which in- turn leads to increased internal pressures. The worst-case scenario is an exploding capacitor due to a too high internal pressure.

What is the actual damage mechanism? How can it be characterized experimentally, and how can it be understood by means of computer simulation? How can we use this knowledge to avoid damage? Or can we even use it for obtaining controlled instead of catastrophic failure of safety-critical parts? These are the questions Ms. Sandra Baltic is dealing with in a research project at Materials Center Leoben Forschung GmbH (MCL).

In the framework of this project the Materials Center Leoben Forschung GmbH developed a computer simulation tool for "virtual prototyping" of electrolytic capacitors produced at the industrial partner TDK (in Hungary and in Germany).

The goal is to achieve a material-saving design for capacitor housings and to guarantee continuing safe operation under difficult environmental conditions. The idea was to release the internal pressure in a controlled way and at a point where the device will not explode.

A special predetermined breaking point in the housing ensures a controlled release of the gases generated in an aging capacitor, thereby leading to controlled failure and preventing the much-dreaded explosion of electrolyte capacitors.

In order to precisely design this breaking point, Ms. Baltic has derived practical guidelines for industrial application from the latest research findings, and has developed the computer simulation tool "SAFE-GAS".

The newly developed software tool is already in use at TDK in Hungary and Germany, and the scientific findings have recently been published in the renowned "International Journal of Plasticity".