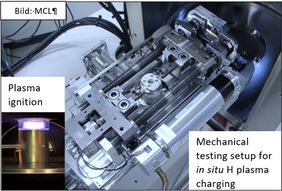 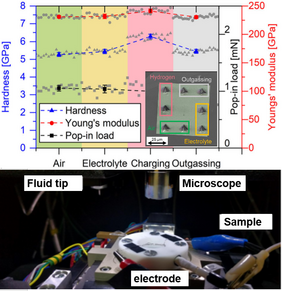 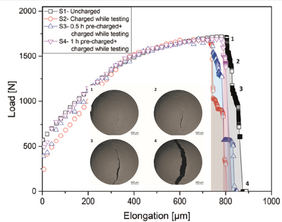 Figure 2: H-plasma charging results: In situ images of the alloy 718 S1 sample corresponding to the points marked in the load-elongation curvem, Image: MCL 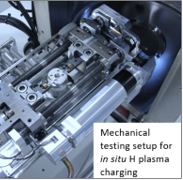 Transitioning to a climate-neutral economy leads inevitable changes in the energy sector, where hydrogen is expected to be one of the most promising energy carriers with zero greenhouse emissions.

Interaction of hydrogen with most of the known materials leads to their degradation and failure also known as hydrogen embrittlement (HE). The underlying mechanisms strongly depend not only on the material but also on the conditions under which H enters it. These aspects imply certain requirements on the experimental investigations, which are not always easy to fulfill with the standard methods and new approaches are needed to shed light onto the fundamental aspects of this phenomenon.

A combination of methods of electrochemical charging and micromechanical testing applied at the microscale provides MCL scientists with a direct insight into the local mechanical response of a material to H charging at different environments as shown in Figure 1. The newly established electrochemical charging setup for a nanoindenter opens new horizons for investigations of the effect of H on the local mechanical properties of various metallic alloys and a possibility for in-depth analysis of H-microstructure interaction in systems exposed to severe H-containing environments.

The ability of H, the lightest element in the periodic table, to escape from the material makes in situ studies of HE an important but also extremely challenging task in most of the available materials. A possible solution to this problem is offered by a combination of a H-plasma charging technique with a mechanical testing setup inside of the scanning electron microscopy (SEM) chamber. This newly developed methodology provides access to direct observations of the material fracture in the SEM during H-charging. The first results obtained with the experimental setup are presented in Figure 2, where the HE testing was done in parallel with the SEM observation of the crack opening and propagation in the material.

Impact and effects
Developed experimental methods of HE investigation are an important and necessary step towards understanding the phenomenon at the microstructure scale. The methods are expected to have an important contribution to development and assessment of new materials for the hydrogen economy.