Accelerating a car to 100 km/h in just a few seconds and achieving a top speed of over 300 km/h requires not only a high-performance engine but also substantial reductions in vehicle weight. 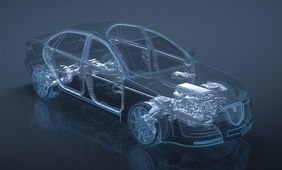 Accelerating a car to 100 km/h in just a few seconds and achieving a top speed of over 300 km/h requires not only a high-performance engine but also substantial reductions in vehicle weight. Lightweight components based on aluminium and magnesium alloys are increasingly replacing components previously made from steel, such as oil sumps, gearboxes and even entire vehicle doors. Their manufacture involves heating the light metal and injecting the molten metal into die-casting moulds under high pressure. The resulting casting requires only minimal mechanical finishing.

One of the worldwide market leaders in automotive die-cast parts production is Georg Fischer GmbH in Altenmarkt (Styria), a production site of GF Automotive. The mould plays an essential part in the success of die-casting. It represents a high cost factor because of its short lifespan and also has a major influence on the quality of the castings.

Strike while the iron's hot

To ensure that the moulds have a long lifespan despite exposure to repeated high temperature loads at one minute intervals, they first undergo "training" in the form of heat treatment which makes the hot-work steel as hard and as tough as possible. Similar to a blacksmith who first shapes his piece of red-hot metal with a hammer and then quenches or hardens it in an oil or water bath, the die-cast moulds are first heated to around 1000°C in a vacuum furnace and then quenched with a stream of nitrogen.

This gentler method of quenching with gas rather than oil minimises the stresses that arise from quenching, so that even moulds weighing up to six tonnes do not break. The hardened moulds are repeatedly heated to 550°C to give the steel exactly the right toughness for the production of up to 100,000 castings. This change in its mechanical properties is attributable to microstructural processes in the atomic and nanometer ranges, which are deliberately modified by the addition of alloying elements like chromium, molybdenum, and vanadium.

The purpose of the heat treatment is to make the die-cast moulds fit for industrial use. Paradoxically, the heat treatment itself represents the greatest thermal and mechanical stress, and this is where the Materials Center Leoben comes in. We describe the entire heat treatment process at micro and macro levels through experimental materials characterisation under real conditions using experimental heat treatments and through state-of-the-art simulation methods. This makes it possible to numerically calculate the stresses occurring during heat treatment and to predict the spatial and temporal development of adverse stress conditions as well as hardness development. The numeric calculation of these microstructural processes enables the development of tailored heat treatment processes and the design of optimised moulds. This makes it possible to actively prevent mould breakage during hardening and to improve the lifespan of the moulds and the quality of the castings, thus improving the overall efficiency of the production process.

The knowledge gained from this project greatly reduces the risk of cracking and breakage of the moulds during heat treatment. In addition, the tailor-made microstructure and improved mechanical characteristics significantly increase the service life of these moulds. Given the ever-faster production cycles and constant price pressures in the automotive sector, the expertise developed at the Materials Center Leoben for Georg Fischer GmbH is an important tool for maintaining a competitive edge internationally and for securing local jobs in Altenmarkt.