The runner up prize of the Flotherm® ΔTJ Award 2018 goes to MCL – Materials for Microelectronics!

Dr. Katrin Fladischer received the award for the paper “A Close Look on Voids in Solders Joints”.

A challenge for the power electronics industry is the reliability of solder joints due to the increasing performance requirements, especially in handling thermal and electrical environments. A known fact is that the presence of voids in the solder joints increases their thermal resistance. In this work, the influence of different voids scenarios in solder joints via finite volume simulation on the example of a commercially available MOSFET was studied. Finite volume simulations (based on FloTHERM®) provide thermal transients that can be transferred into their corresponding structure function. Thus, changes in the heat path and the corresponding thermal resistance can be evaluated and interpreted.

In a first step, the MOSFET was analyzed in detail by radioscopic imaging, mechanical cross sections and scanning electron microscopy. In a second step, a geometrical model of the MOSFET was set up in FloTHERM® and different void scenarios in the solder joint g were specified. In a third step, simulations were carried out to obtain the influence of the voids. Finally, the void scenarios were compared and the impact on the temperature field inside the MOSFET was evaluated.

The MCL team has successfully demonstrated to be able assess the quality of solder joints in terms of their void setup by finite volume simulations and the analysis of resulting structure functions.

MCL congratulates its successful team cordially for receiving the Flotherm®ΔTJ Runner Up Award 2018!

The authors gratefully acknowledge the financial support under the scope of the COMET program within the K2 Center “Integrated Computational Material, process and Product Engineering (IC-MPPE)” (Project No 859480). This program is supported by the Austrian Federal Ministries for Transport, Innovation and Technology (BMVIT) and for Digital and Economic Affairs (BMDW), represented by the Austrian research funding association (FFG), and the federal states of Styria, Upper Austria and Tyrol. 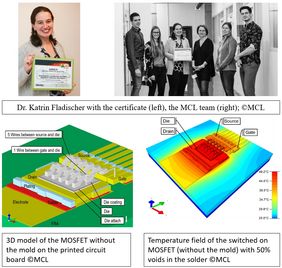